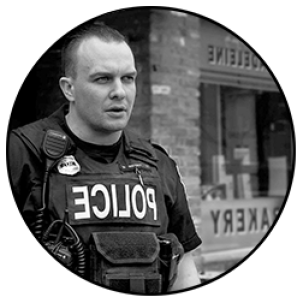 That’s the essence of this shooting breakdown. Getting pulled over and stopped by the police is certainly a stressful experience, especially if they’re indicating that they’ll arrest you. That doesn’t give anybody a license to drive through a neighborhood at a high rate of speed while endangering innocent lives. The saying “play stupid games, win stupid prizes” is definitely in play with this incident, the stupid prize being shot and killed by the police.

Riots and looting followed this incident, which seem to be opportunistic in nature, requiring only an iota of justification by the looters. On the topic of those who truly empathize with the subjects in this video, my suggestion is that their empathy chips are malfunctioning. I empathize with the larger community who are put in danger by the reckless and self-centered actions of the driver.

Well, from the news reports and what’s presented, the officer failed to turn on his body worn camera. News reports indicate he was fired for that failure, which is sensible given the current political climate and end result of the interaction.

As well, whenever I see a cruiser fail to make contact with a vehicle to prevent further flight, it’s very disappointing. More aggression at an early point can prevent the need for less in the future. Had the officer physically pinned the subject vehicle from the rear, it may have prevented its employment as a missile towards the officer.

It’s something I saw in my career in policing, an over aversion to risk. I didn’t share that approach, but many police managers fail to see that kneecapping officers results in worse outcomes.